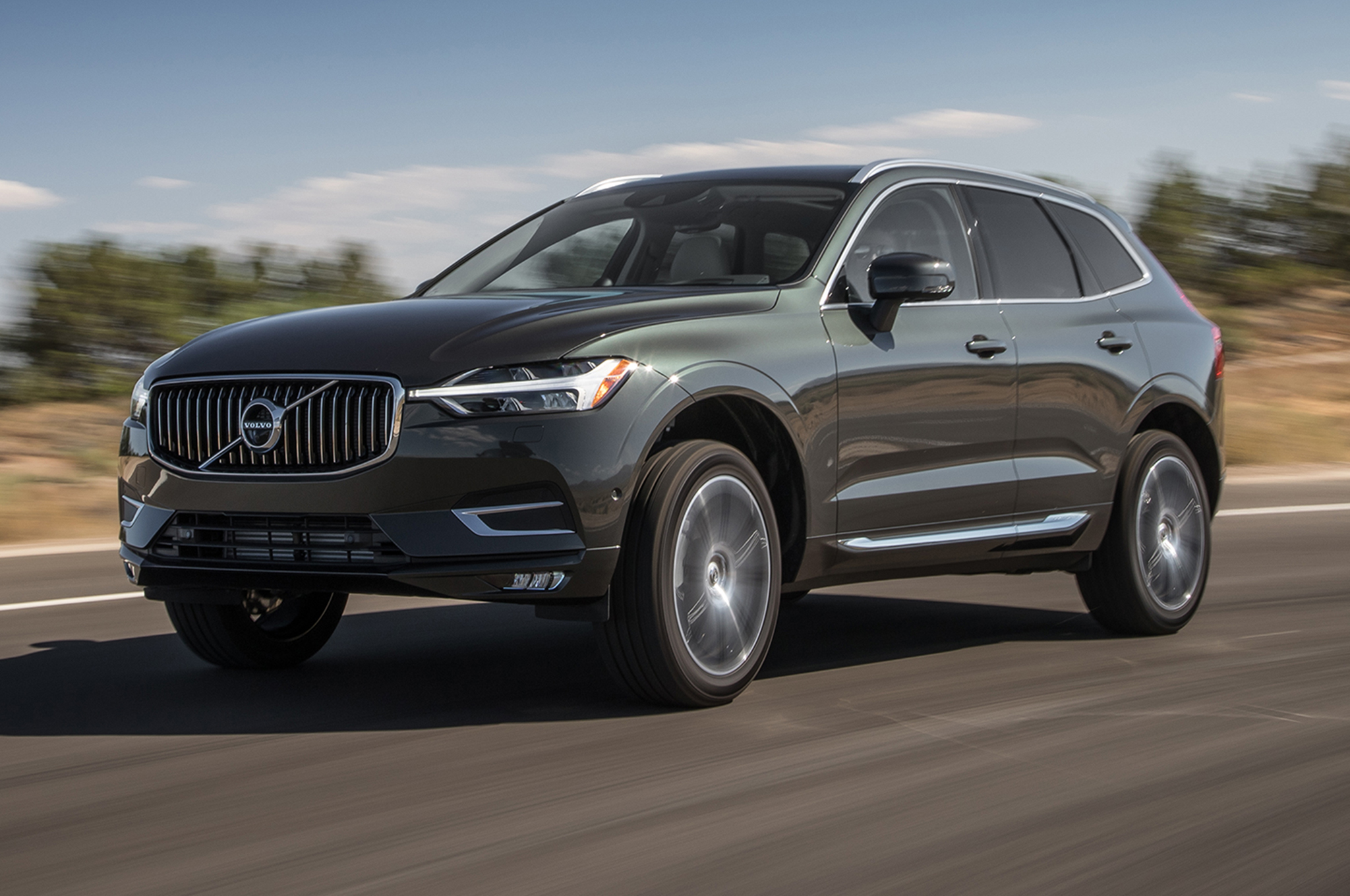 The 2018 Volvo XC60 carries on the Swedish brand's breathtaking visual makeover under the direction of design chief Thomas Ingenlath. With crisp lines, beautifully restrained surfacing, and a dash-to-axle ratio that makes it look like there's a longitudinal engine under the hood, this XC60 presents a more elegant exterior than the previous model. But a rising beltline, subtle haunches over the rear wheels, a more steeply raked windshield and backlight, lower nose, and a shorter wheelbase ensure the XC60 is still perceived as the sportier alternative to the larger XC90.

As with the XC90-and the beautiful S90 sedan and V90 Cross Country wagon-the XC60's interior is a textbook example of 21st century Scandinavian Zen: Studied, airy, and sophisticated. Standard equipment levels are high, with all XC60s available with the nine-inch central touchscreen, moonroof, power front seats, leather on the seat surfaces, and a power tailgate. And, because they're Volvos, all XC60s come standard with an impressive list of safety equipment, including active systems that help avoid collisions, help keep you on the road, and help keep you in the right lane on the road, plus the full complement of passive safety equipment, from curtain airbags to whiplash protection.

The two models tested here illustrate the bandwidth of the new XC60 range. The T5 Momentum is the entry-level XC60, powered by the turbocharged version of Volvo's 2.0-liter direct injection inline-four that delivers 250 hp at 5,500 rpm and 258 lb-ft of torque at 1,500 rpm. The only options fitted to our tester are the $1,100 Vision Package, which includes useful driver aids such as blind-spot warning, cross-traffic alert, and various park assist options, and $595 metallic paint, bringing the total price to $44,690.

The T6 Inscription ups the ante in terms of power and equipment. In T6 form, the 2.0-liter four gets a supercharger as well as a turbocharger, boosting power to 316 hp at 5,700 rpm and torque to 295 lb-ft at 2,200 rpm. The Inscription trim package-priced at $3,800-adds some tasteful chrome trim to the exterior, high-style open-pore driftwood trim to the interior, as well as keyless entry, the top-end infotainment system, a cooled glove compartment, and illuminated door handles. 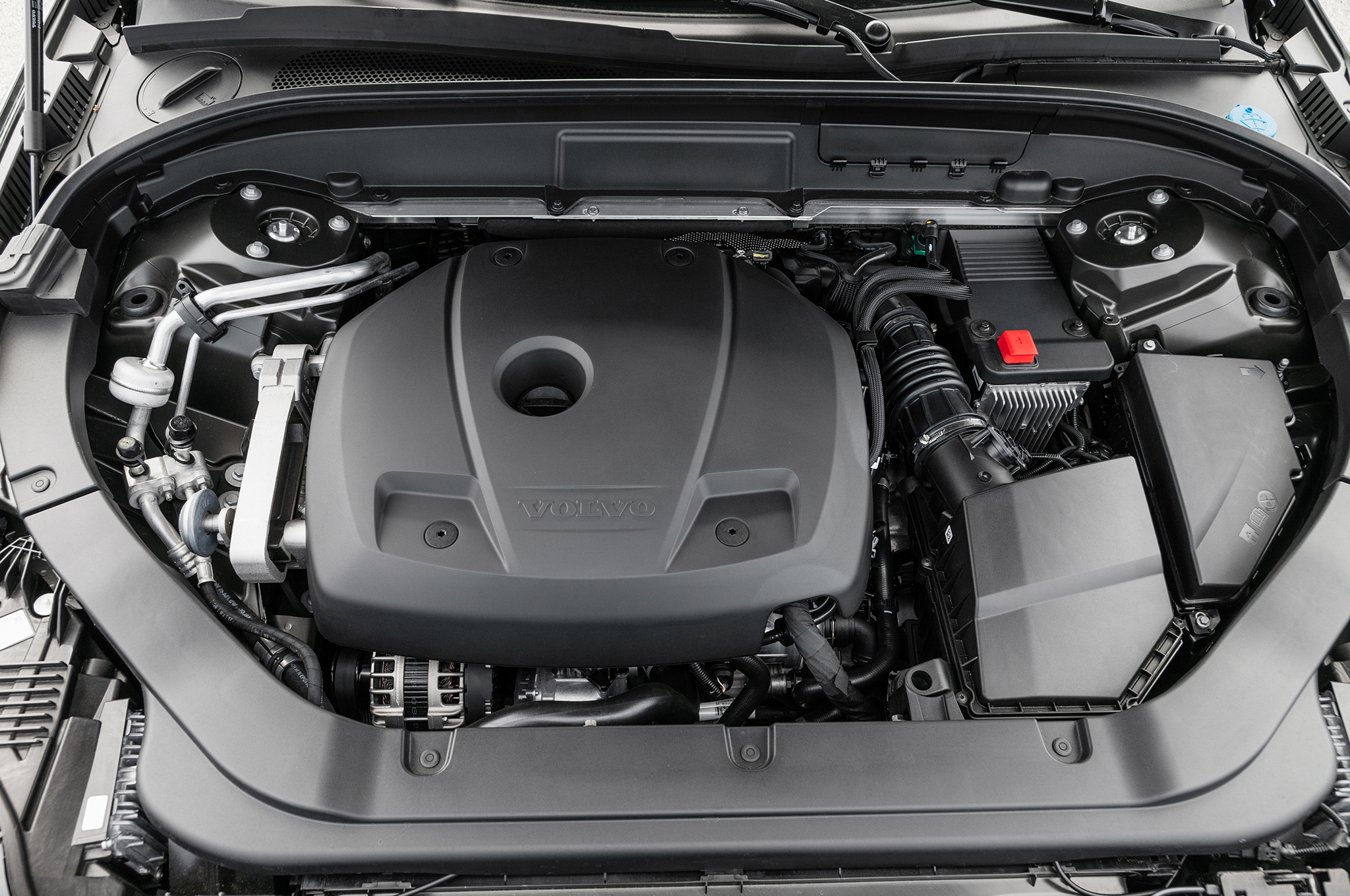 Volvo ticked all the option boxes on our T6 tester. In addition to the Inscription trim hardware, it came equipped with the same $1,100 Vision Package as the T5, along with a $2,000 Convenience Package that includes a number of semi-autonomous driving options, a $3,000 Luxury Package that delivers full Nappa leather trim, a heated steering wheel, heated rear seats, and heated and cooled front seats, and a $1,900 Advanced Package that features a 360-degree camera, a heads-up display, and active LED headlights. And it didn't stop there: Underneath was the $1,800 air suspension setup, and the interior resonated to the dulcet tones of the $3,200 Bowers and Wilkins premium audio system. With metallic paint, a black rooflining, and a sports steering wheel thrown in for good measure, all those goodies take the T6 from a base price of $45,945 to a stiff $63,290. That's pretty much Range Rover territory.

The T6 Inscription tips the scales at 4,297 pounds, or 197 pounds more than the T5 Momentum. Even so, the turbo- and supercharged engine's greater output means a superior weight-to-power ratio-13.6 pounds per horsepower, compared with 16.4 pounds per horsepower-which translates to superior performance on the track. While the T5 Momentum takes 7.3 seconds to hit 60 mph from standstill and runs the quarter mile in 15.5 seconds at 86.1 mph, the T6 Inscription nails 60 mph in 6.6 seconds and the quarter mile in 15.0 seconds at 89.9 mph.

The numbers only tell part of the story, however. Both the T5 and T6 have identical eight-speed automatic transmissions and Haldex all-wheel-drive systems, and the lack of a supercharger under the hood of the T5 is definitely noticeable when pulling away from a standstill, even under light to medium throttle. The lag in response, though modest, is brought into sharp relief by the instant-on surge from the T6 when you squeeze the gas pedal. It's the brighter, livelier, and more engaging drive. The T6 also has selectable drive modes, though the Dynamic setting doesn't quite deliver on the promise because the transmission doesn't feel as alert as it should be.

The sophisticated calmness of the XC60's design doesn't, sadly, translate to its on-road demeanor. The T5, rolling on 235/60 R18 tires and steel springs, feels slightly plusher than the air-suspended T6, which is fitted with lower profile, higher performance 255/45 R20 rubber. No matter which suspension and tire combination you choose, the XC60 can be briskly hustled along smooth, winding roads, but both versions suffer from a jittery, pattery ride on less-than-perfect surfaces, with more noise transmitted into that wonderful cabin than expected. Off road-and both versions cope well with low traction surfaces and modest articulation events, the air suspended T6 raising its ride height and enabling hill descent control when off road mode is selected-the XC60 can be a busy, noisy experience. 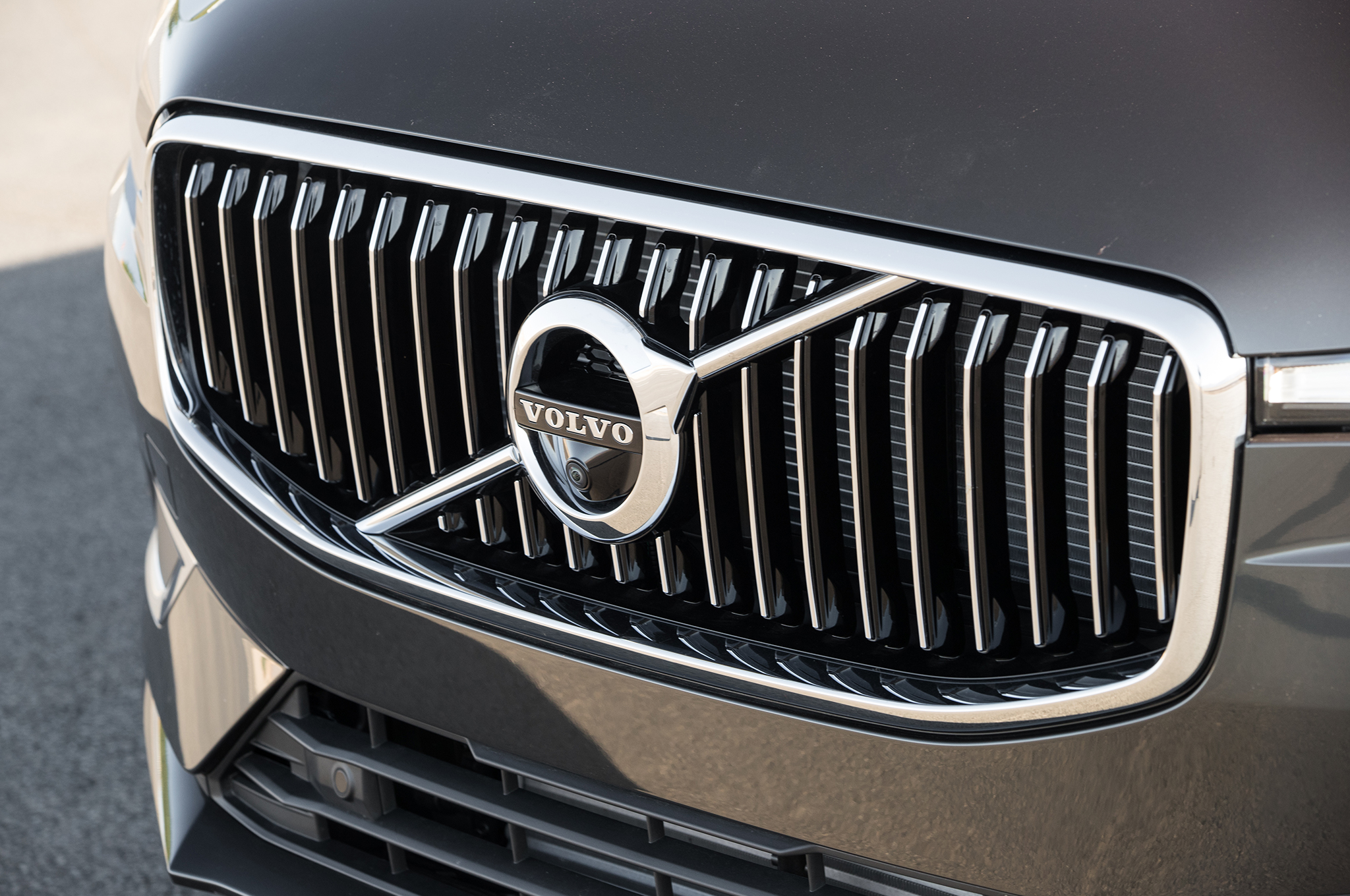 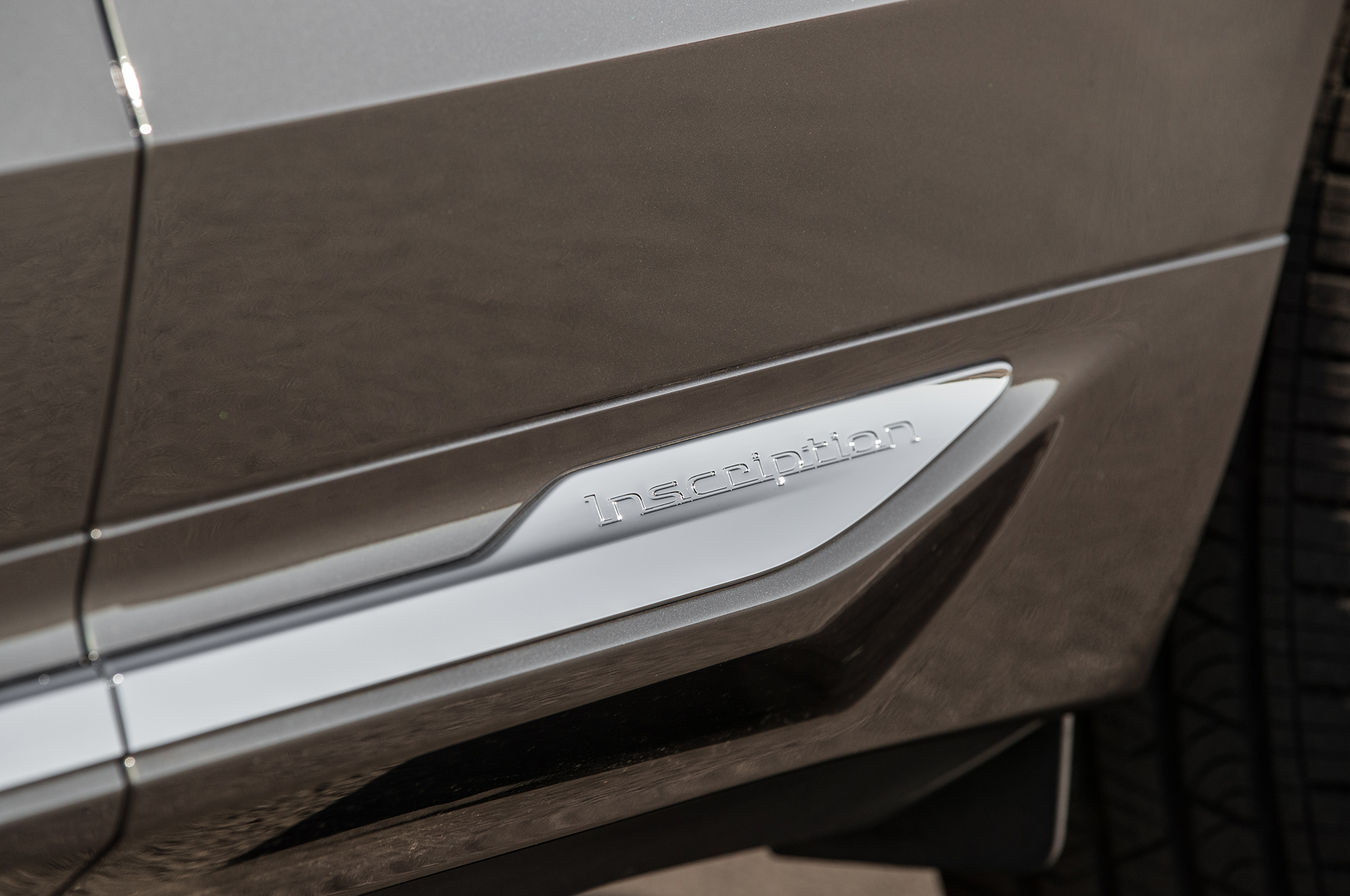 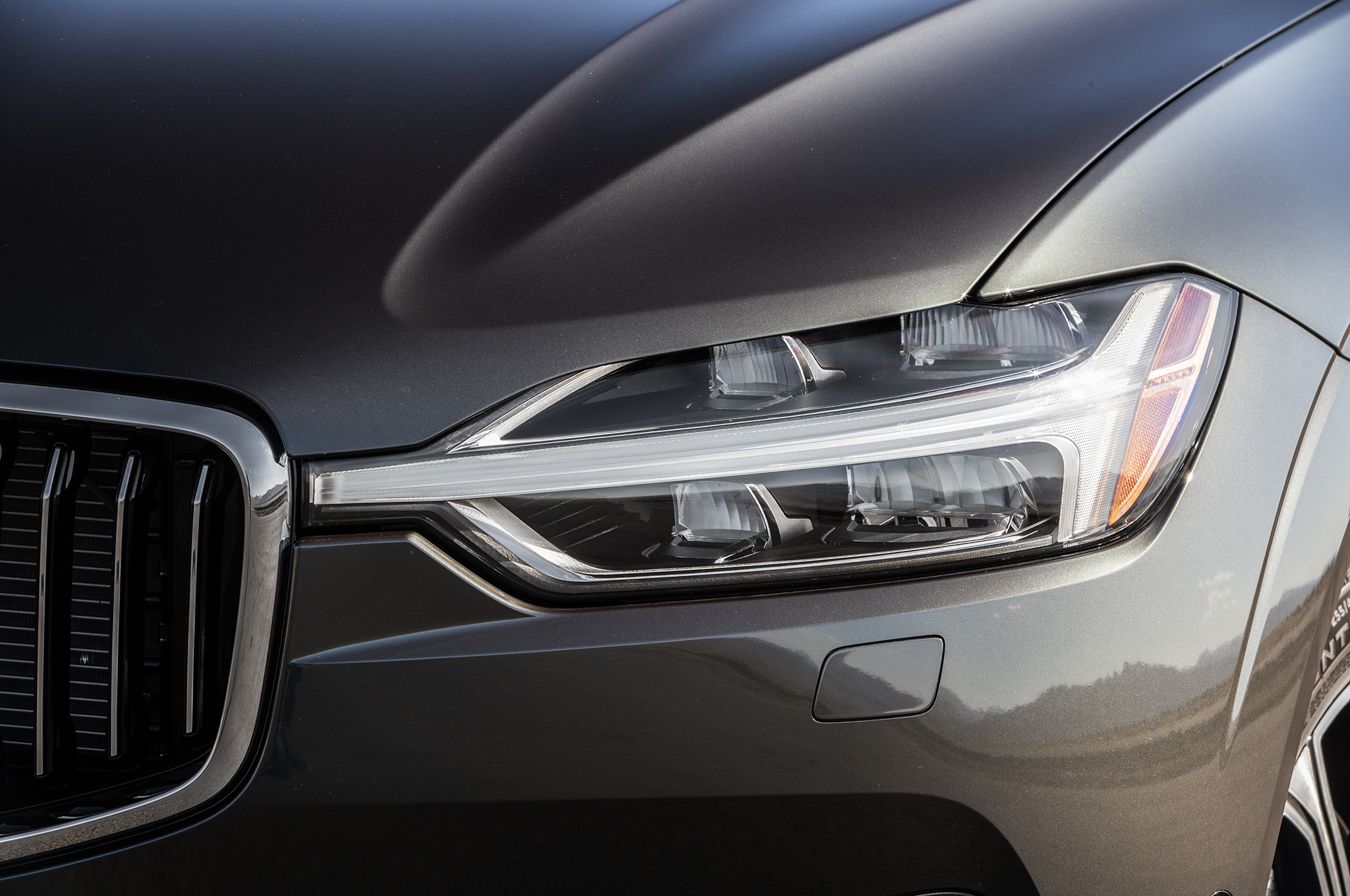 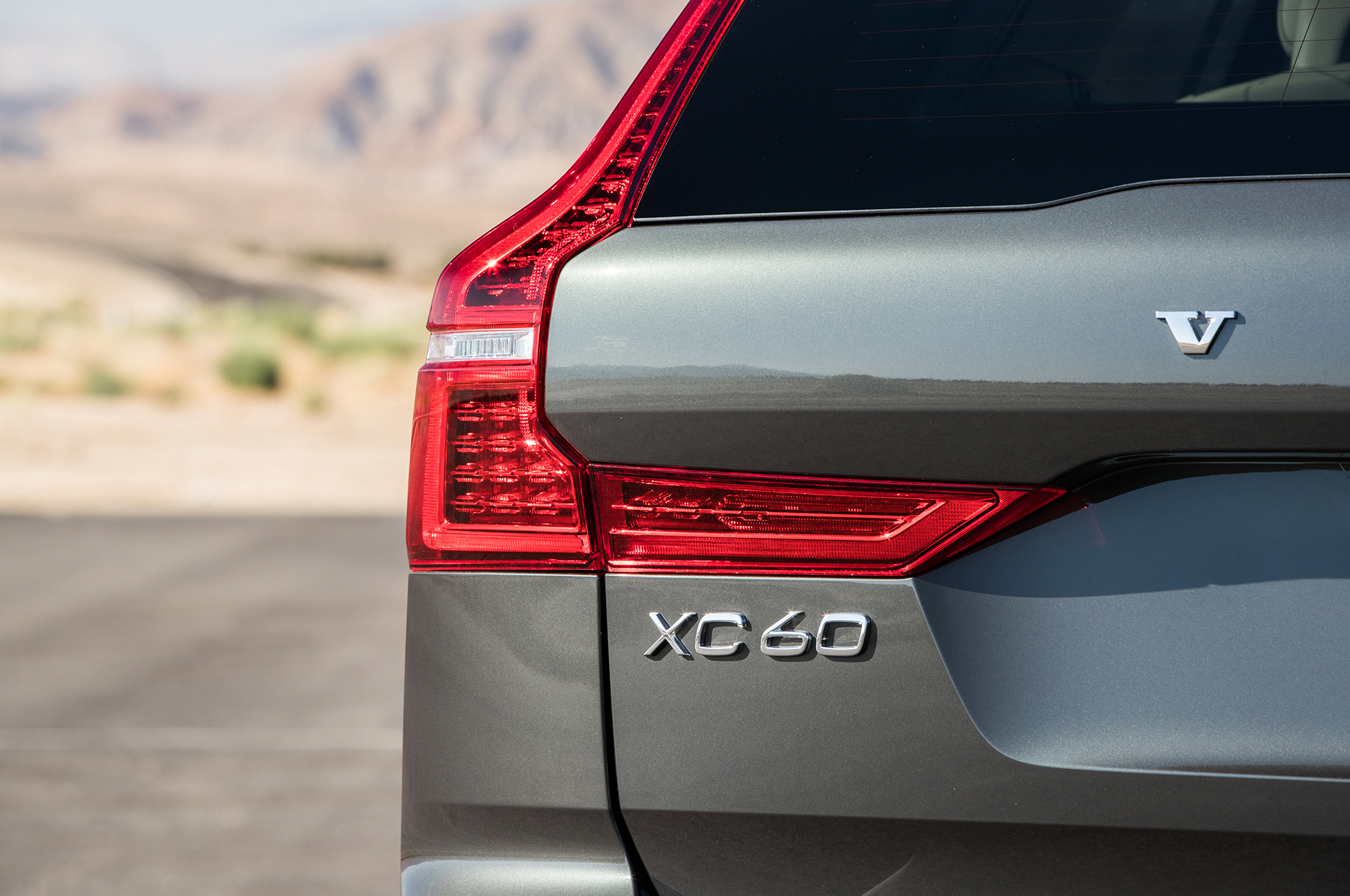 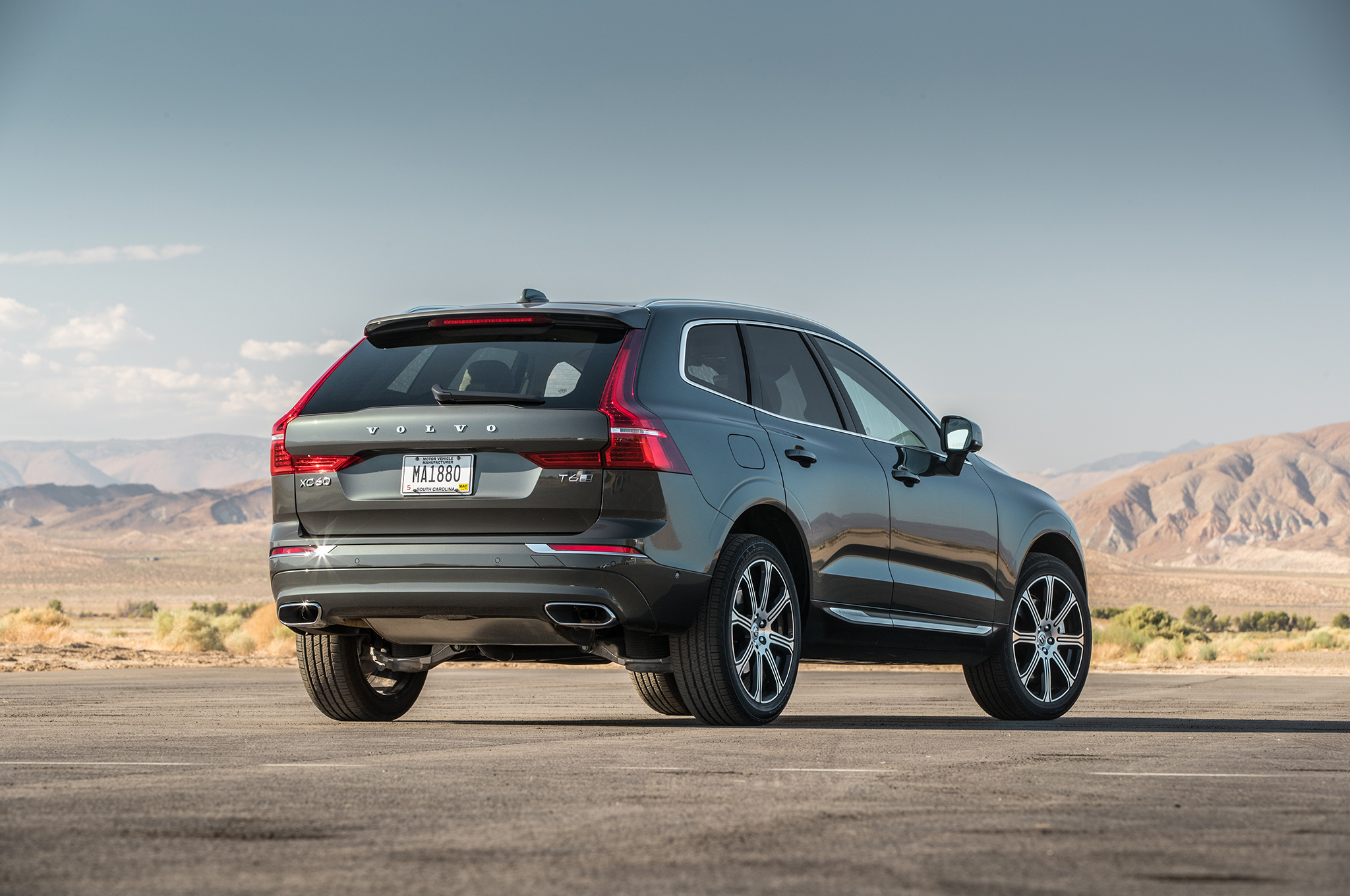 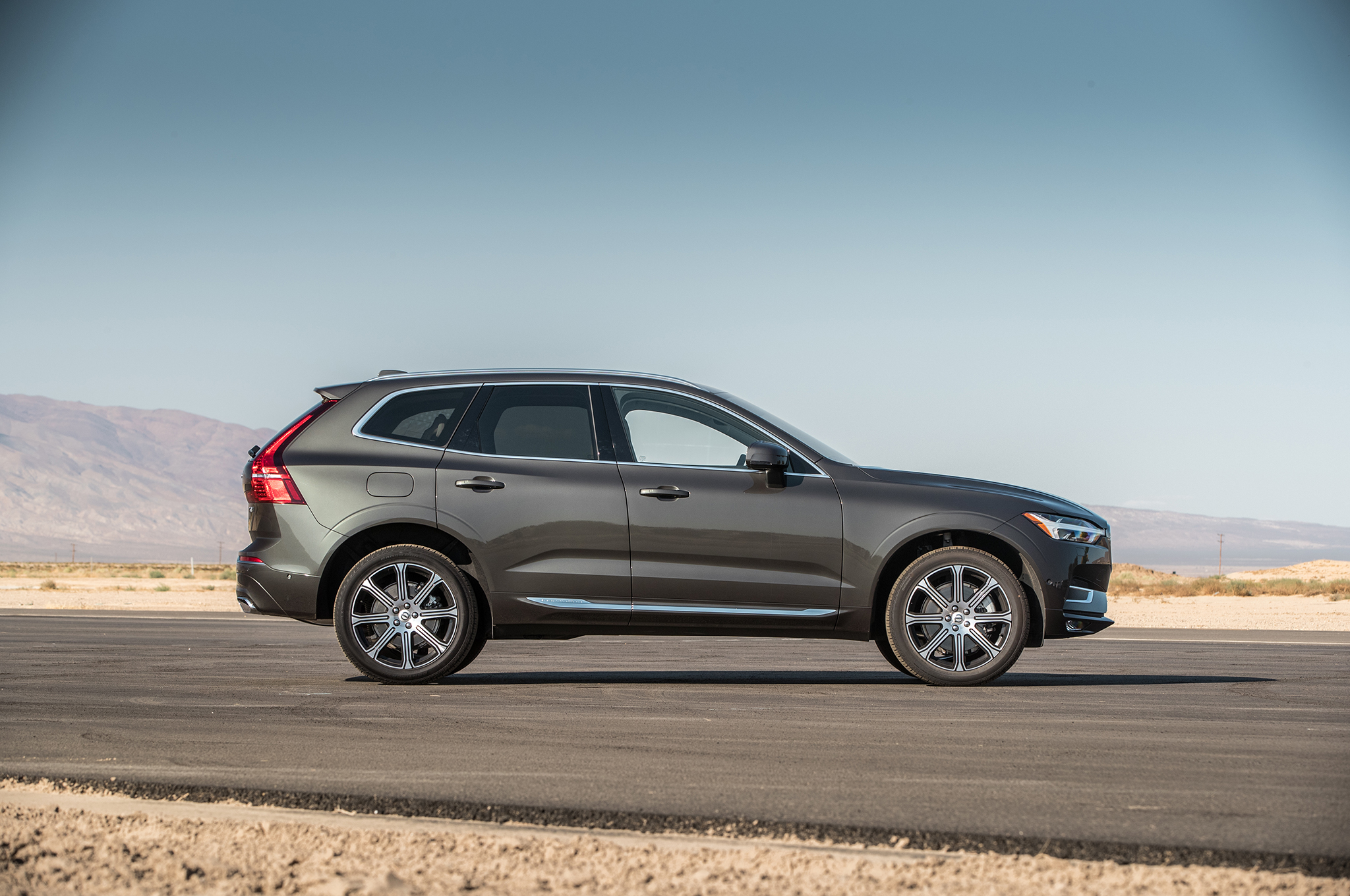 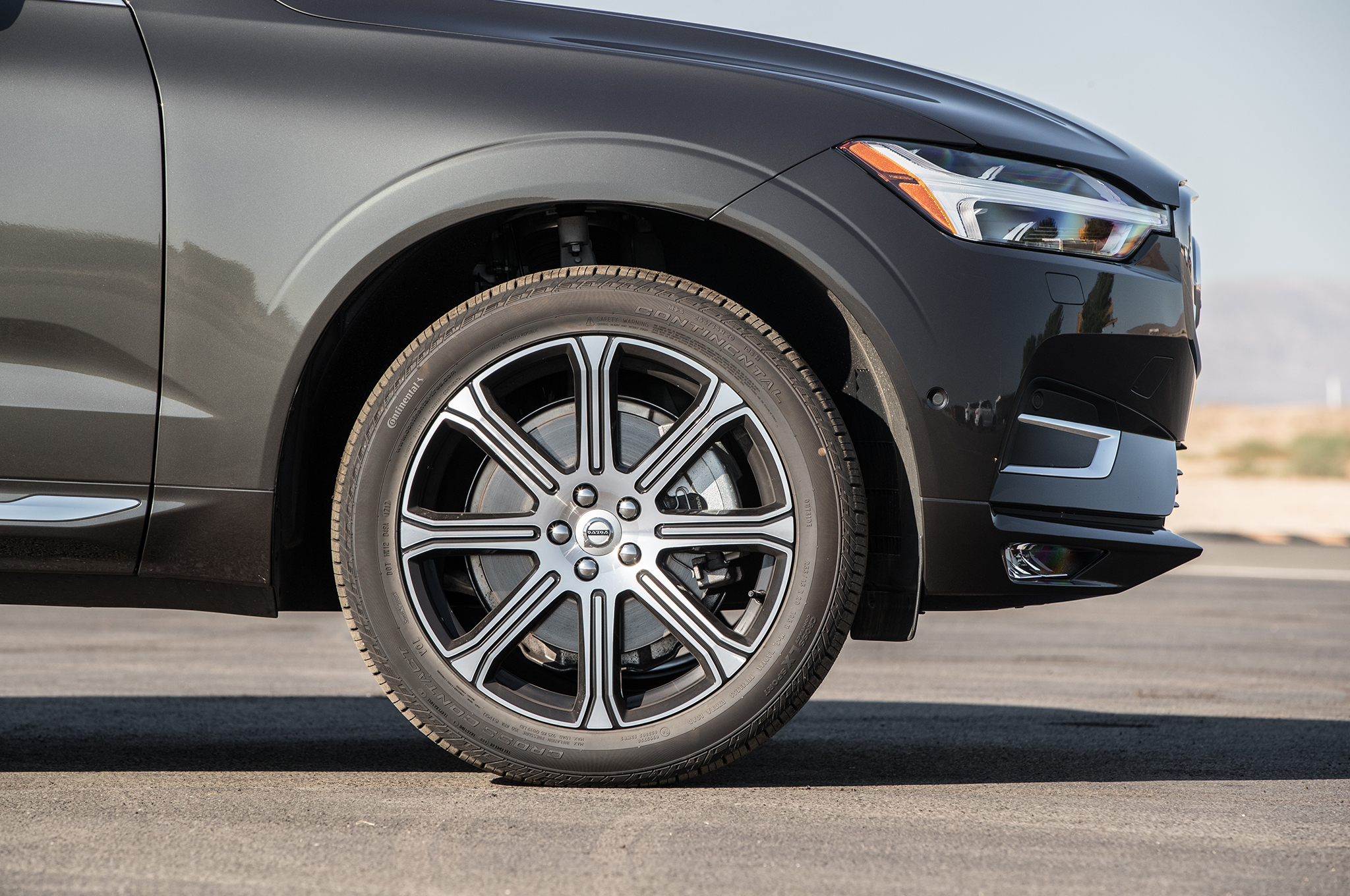 Volvo boss Hakan Samuelsson says that by 2020 "no-one should be killed or seriously injured in a new Volvo car", and the XC60's advanced army of driver aids are proof the company is aggressively pursuing that bold vision. Indeed, there are times when the XC60 feels like it's driving you, rather than vice versa. Pilot Assist-a near-autonomous drive function that's part of the adaptive cruise control system offered with the Convenience package-results in inconsistent steering feel. At times it feels numb on center, then-as you initially pull left or right-it's as if the whole steering system has been dipped in molasses, before the weighting lightens up once more. A sudden hump in the road can have the seat belt cinching you so hard it'll almost punch the air from you lungs. Ladies ? I'll put this as delicately as I can ? Pay attention to how the belt runs across your chest.

Working the 9.0-inch infotainment screen at the center of the dash means taking your eyes off the road as you dive through lots of menus to get what you need, so it's probably just as well the XC60 also has a collision avoidance system as standard. It might have lovely graphics and frictionless Apple-style touch and swipe control, but the interface seems to have been designed by a bunch of show-off software engineers who want you to keep staring at their work. And it can be slow to load at times.

After driving both the T5 Momentum and the T6 Inscription, we'd opt for a version that's somewhere between the two, combining the punchy 315-hp T6 engine with the Momentum trim and a handful of choice options, including the Advanced, Vision, and Convenience packages, and the $1,400 navigation package that also upgrades the Momentum's 8.0-inch digital dash display to the nicer, more informative 12.3-inch unit. 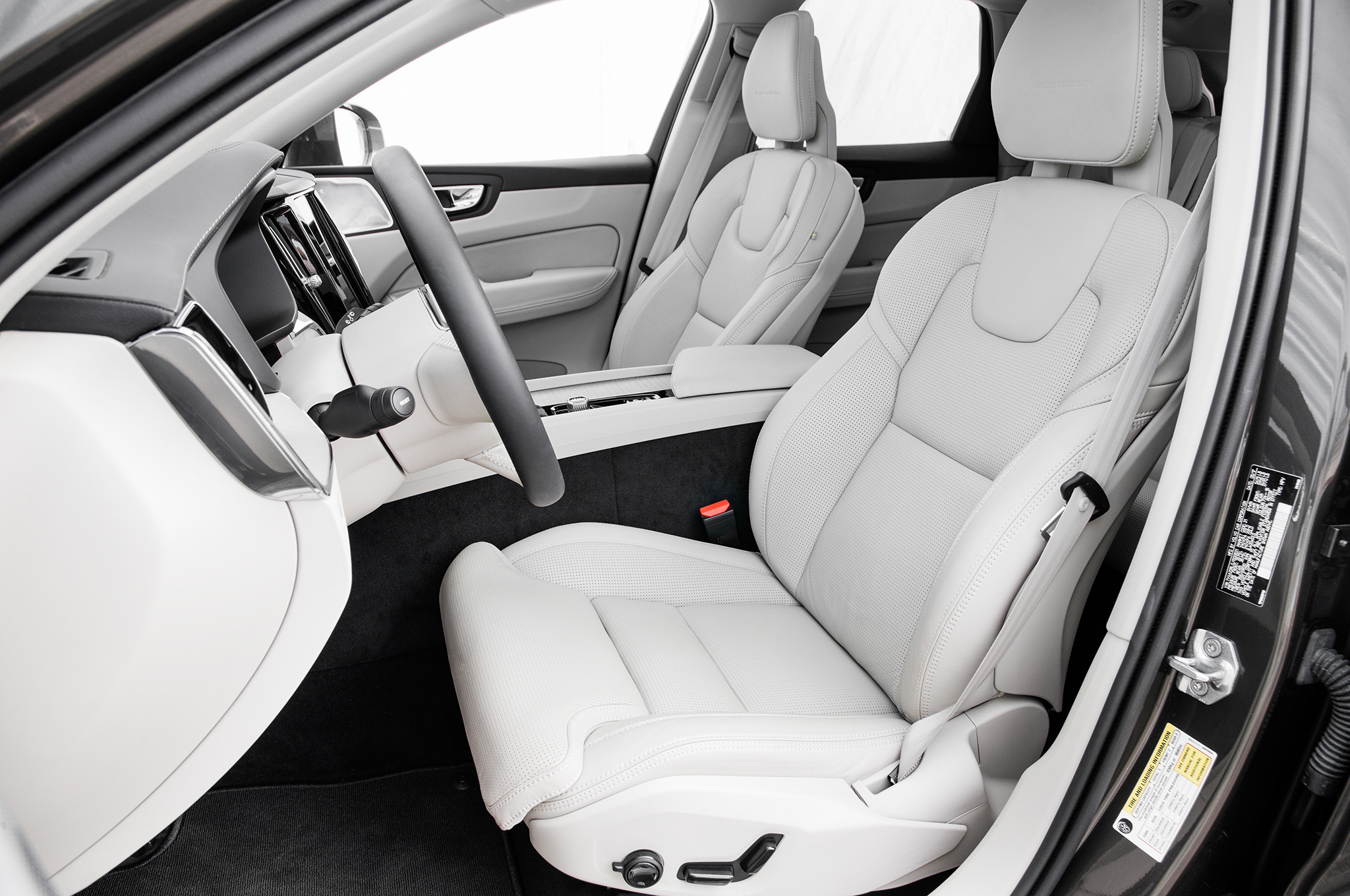 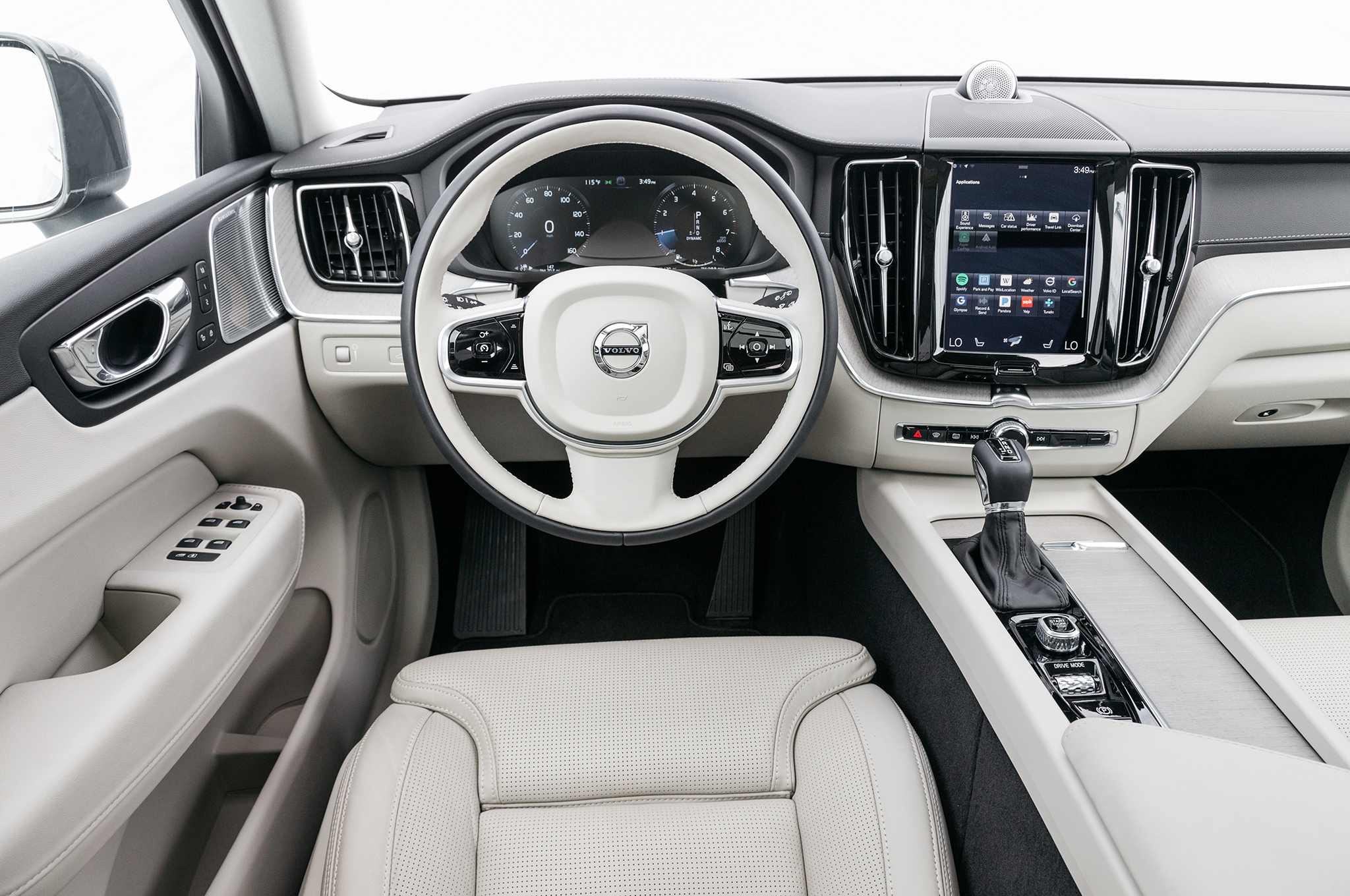 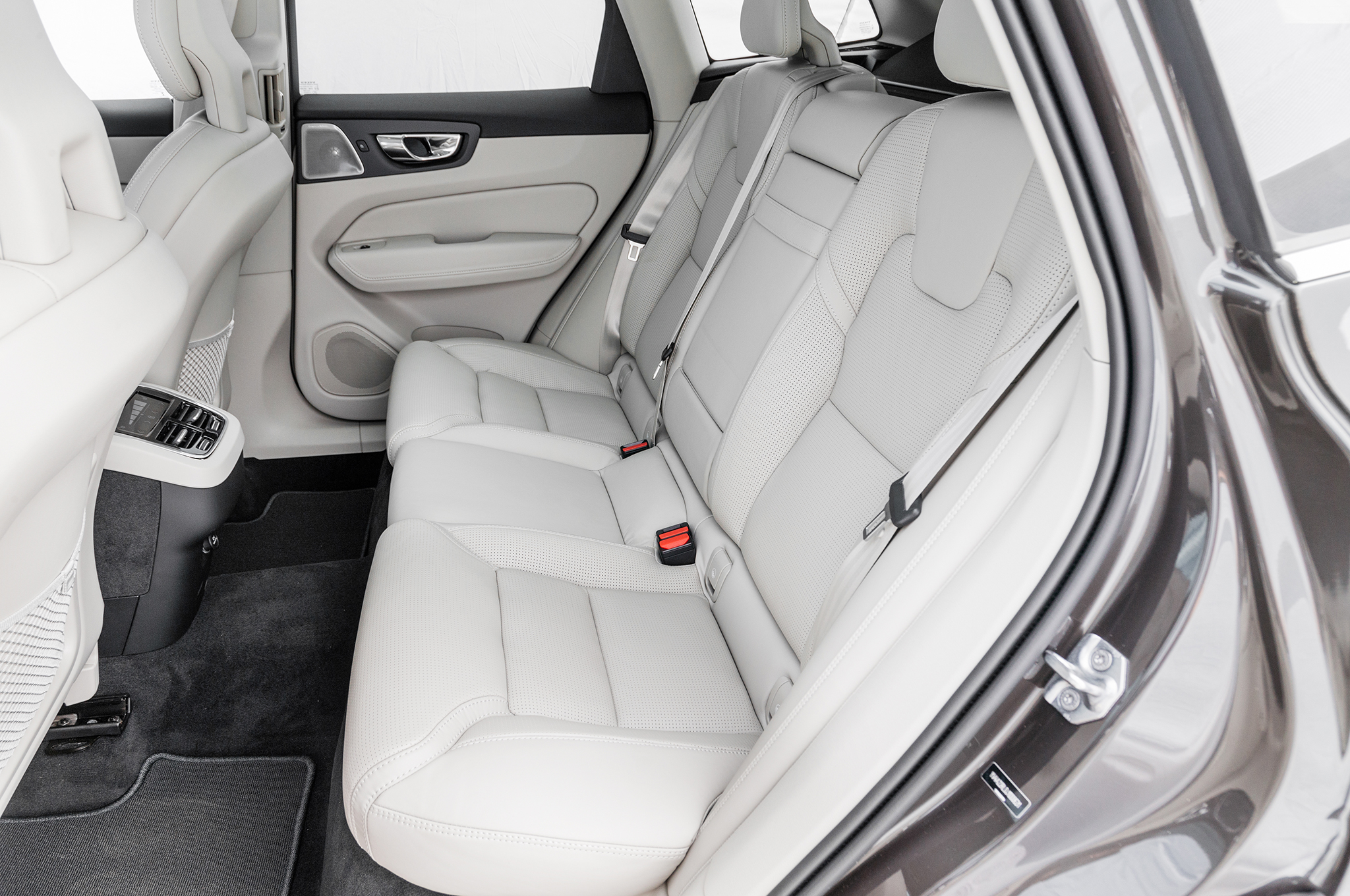 Passing on the optional air suspension and 20-inch wheel/tire combo would help the ride as well as save money; Volvo's configurator suggests an XC60 specced this way would retail for about $54,000. For that you get a well-appointed, ultra-safe midsize SUV that looks like a confident, supremely elegant alternative to the German hegemony in the segment.

Even if it doesn't quite ride that way. 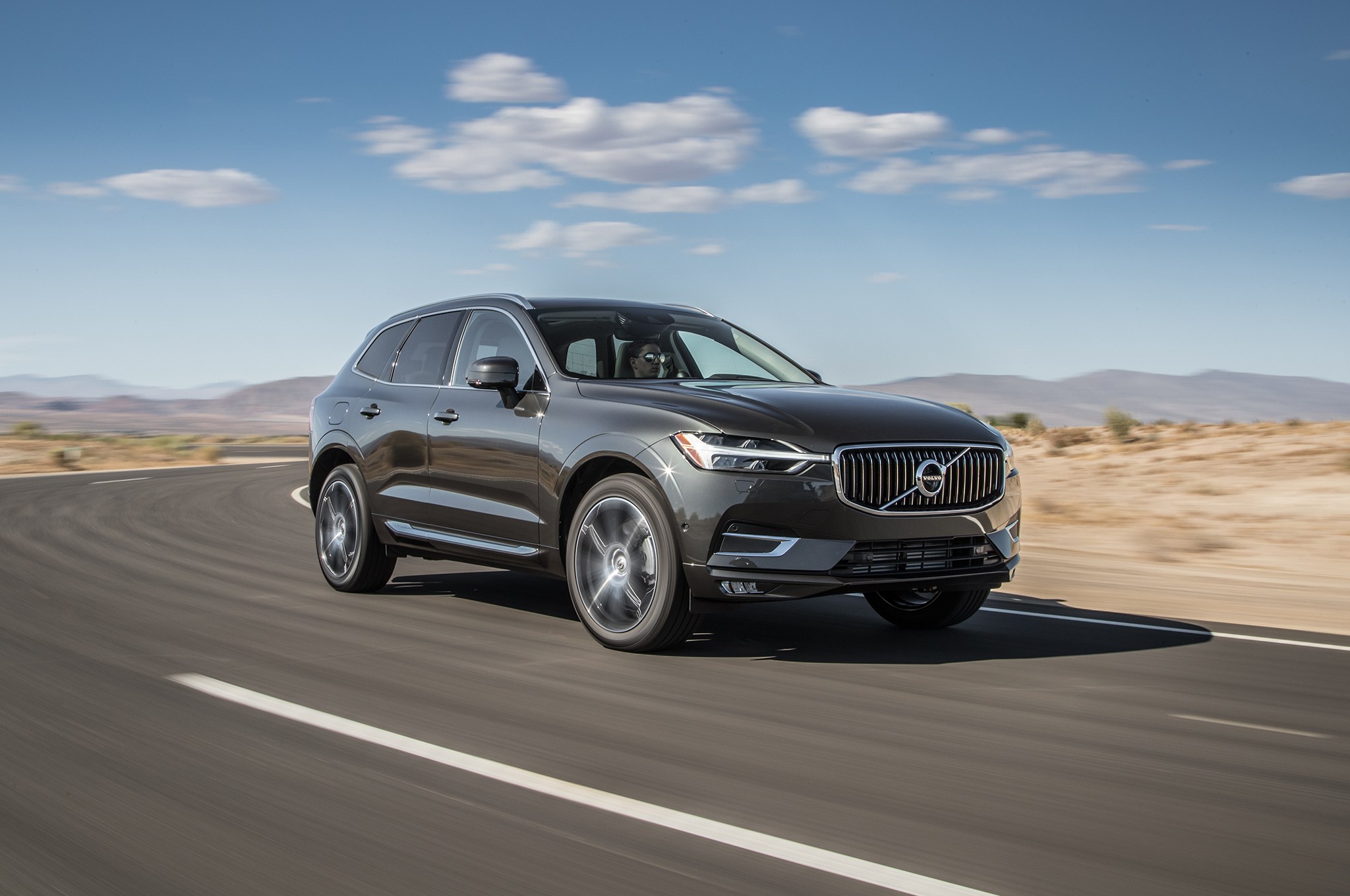 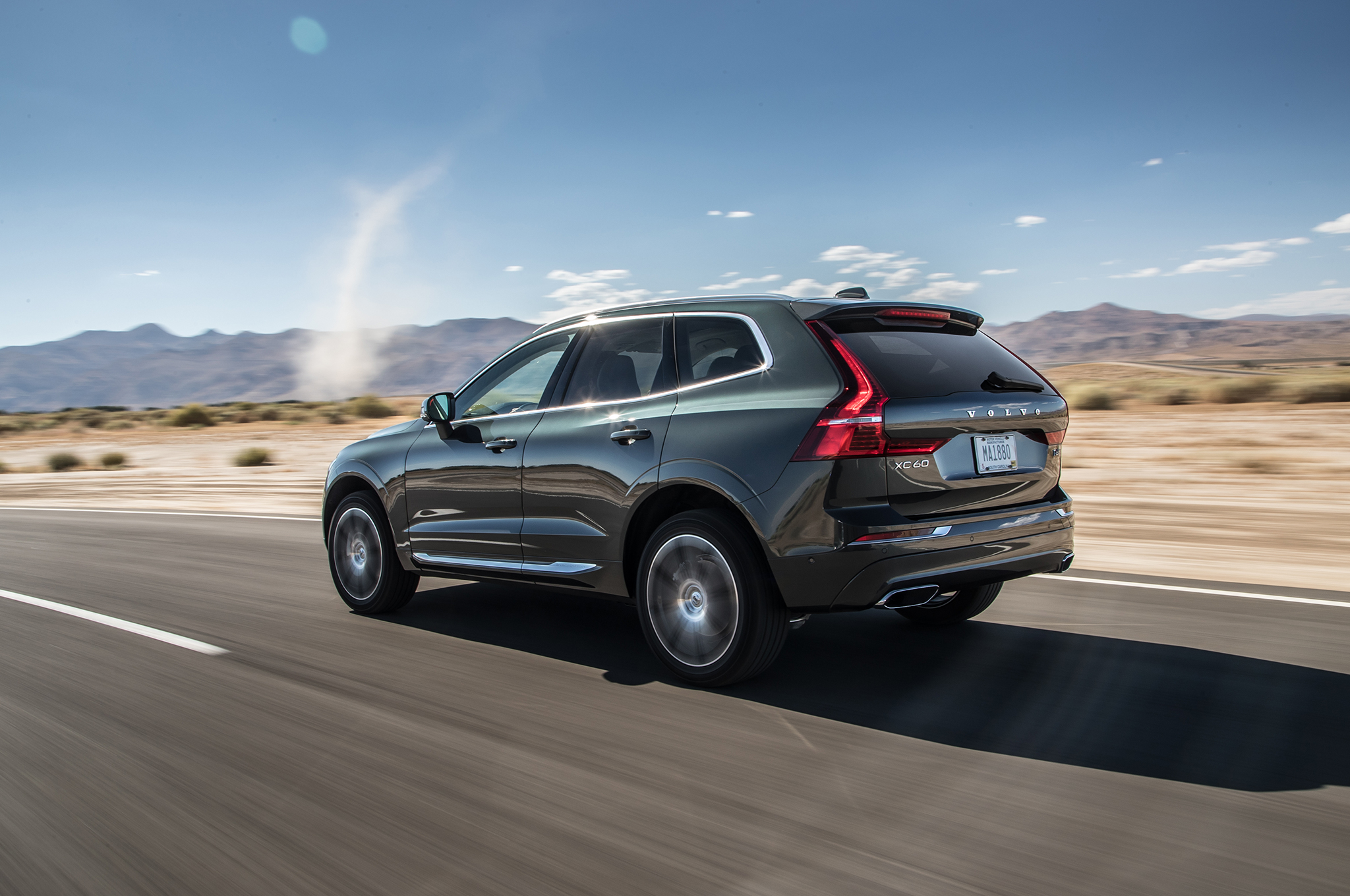